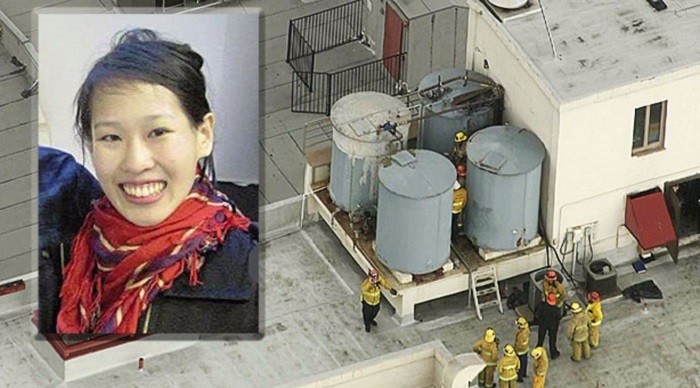 Today we will be talking about the mysterious case of Elisa Lam. This case has baffled people for a few years now, and every now and then a few articles will pop up about her. Today I have decided to check out a few different things that I have noticed about this case. According to the police autopsy, Elisa Lam was 21 years old, around 121 pounds, and about 5’5. Her body was found after a maintenance worker from the hotel was told to look at the water tanks due to complaints of poor water pressure. At 10 am on 02/19/2013 the maintenance worker, Santiago Lopez, reported her body to the LAPD, and at 10:22 am first responders determined her death as drowning. Prior to Lam’s body being found, a missing person report was made on 02/04/2013. The report stated that she was last seen on the 31st of the month prior. She was on a small vacation from being a college student in Vancouver Columbia Canada and had agreed to check in with her parents every day and when she had arrived at the hotel she would be staying at. Her parents called to file the missing person’s report. The LAPD searched the hotel to no avail. Elisa was Last seen on 02/01/2013 via the security video from the Cecil Hotel’s Elevator. The hotel video shows Elisa Lam in the elevators acting rather strangely, she can be seen stepping into the elevator and pushing all the floor buttons stepping in and out of the elevator, poking her head out sideways toward the hotel’s hallways in between. She then peers out of the elevator another few times before stepping out of the elevator entirely. In the last few seconds of the video we can see the elevator door open and close a few more times, and she is never seen again.

Many have tried to try to uncover the truth of Elisa Lam’s death. Like many, most have been unable to uncover what could have happened, however many theories exist. A Reddit user by the username hammmy_sammmy says that it may have been due to the medication she took. According to Lam’s family, she was bipolar and was taking medication for it. Her sister stated that she never had suicidal tendencies and was aware of herself. Hammmy_sammmy however argues that Elsia may have not been taking her medications as prescribed. I really have to hand it to hammmy_sammmy as they did extensive research on the subject of the medications she was on. To summarize they said that due to the combination of her medications, if used incorrectly can lead to manic attacks. There is a very strong risk of mania associated with taking antidepressants alone without the use of antipsychotics or mood stabilizers. This theory is further proved by the video footage of Elisa in the video. The video shows Lam pacing around the elevator and moving her hands around, such seen in people who suffer from mania. The theory also states how the blood work from the autopsy did not test for other drugs that may prove foul play. However witnesses that saw her last stated that she was seen alone the entire time. Finally hammmy_sammmy states that someone in a manic state might be capable of climbing their way up to the water tank and closing the lid. If you would like to read hammmy_sammmy report I will have an entire page on my website dedicated to any information I have on this case with their post linked.

Although I find this theory extremely compelling I still find it hard to believe that Elisa would be able to climb her way up to the water tank on top of the roof of the hotel. Based on court statements from the hotel’s maintenance, Santiago Lopez, recalled how troubling it was to just find her body. Santiago first had to make his way up to the 15th floor of the hotel, then he had to make his way up a staircase to the roof, turn off the rooftop alarm which would sound off and alert the hotel staff and the first two floors, he then had to climb up on a platform where the water tanks were located, and finally climb a ladder to get to the top of the tank. Where he finally noticed an open hatch and the body of Elisa. Anyone making their way to the water tanks would find it extraordinarily difficult to do so without alerting staff. Furthermore the autopsy report states that the toxicity report returned inconclusive as there were no signs of drug or alcohol intoxication. The report also shows no signs of foul play or self-harm, leaving the cause of death stated to be an accident. However newer evidence was found. A police officer came out to say that his k-9 had followed Elias’s sent to a window leading to a fire escape. Did Lam climb her way up through the fire escape to the roof bypassing the rooftop alarm? The officer stated that after the window the sent was lost, so although this may be a possibility it still does not explain how she was able to get into a tank a maintenance worker had to use a ladder to get to. With not a lot of evidence this case has been left unsolved to many while the LAPD is certain that there is no case at all.
Many have also theorized that the hotel itself may be haunted. This theory may also be further proven by the hotel’s long history of unexplained deaths, suicides, and a long history of murders. According to wiki there have been seven cases of suicide. With cases as early as November 19, 1931. Apart from these there have also been nine unexplained deaths, and housing two known murders in the hotel.

List of deaths and violence at the Cecil Hotel

Connect with:
Facebook Google Twitter
Back to
log in
Choose A Format
Personality quiz
Series of questions that intends to reveal something about the personality
Trivia quiz
Series of questions with right and wrong answers that intends to check knowledge
Poll
Voting to make decisions or determine opinions
Story
Formatted Text with Embeds and Visuals
List
The Classic Internet Listicles
Countdown
The Classic Internet Countdowns
Open List
Submit your own item and vote up for the best submission
Ranked List
Upvote or downvote to decide the best list item
Meme
Upload your own images to make custom memes
Video
Youtube, Vimeo or Vine Embeds
Audio
Soundcloud or Mixcloud Embeds
Image
Photo or GIF
Gif
GIF format